Detailed documentation of the "World of Tomorrow" in beautiful Kodachrome.

Reviewer: Spuzz - favoritefavoritefavoritefavoritefavorite - November 6, 2005
Subject: Too bad theyre mechnanical!
Continuing where we left off (that is, the aquacade), Johnny Weismuller is introduced, and he does a brief intro, we then see a comedy but between him and Billy Kreuger, on the diving boards, with Kreuger doing the wet part. It seems to me that Weismuller never actually entered the water during the whole show. Theres some more great diving footage, with the age old rule of running while you are diving thrown out, because the divers get some nice great distance here. More dancing, more swimming, more posing, more lame ass comedy.. Man, this MUSTVE been a long show. The finale is fun, GREAT staircase entrance! The women look like the statue of liberty, the men look like guards from the planet Mongo. The whole thing ends with models with banners of every state (watch the girl in the back with the Georgia banner be a little wobbly on her feet) AND a huge US flag! Huzzah!
We then go to Merrie England, where theres replicas of famous buildings. I THINK that was the Tower Of London.. Hmmm.. The Irish Linen shop was famous? Theres a display of the Crown Jewels! After that, we go to a VERY bizarre stage show. Good audience here. OK, first we see a.. dog. Not too sure what his trick is.. Seems his master is goading him on Next, we have an accordionist! Look at the HOST, he looks to be either this close to booting her off, or waiting to get this over with. Then we have bicycle tricks! Then we have clowns doing the bicycle tricks! Or trying to! Nyuk! After that, A irish pipe band comes out. Who cares about that? Obviously not the audience, who rather amusingly have all of a sudden disappeared save for a few people.
After England, we go the Gangs Of New York section, yes! Its old New York! Actually, its George Jessels Old New York. Who is George Jessel? Well, he was an actor on the stage, famous as he was, this is probably a wise move as having Bill Irwin having an Igloo. Anyways, in this section, we have, yes, the saloons and the dancing girls, and old time (not spelled tyme here?) movies. Why would Old New York play old time movies if this was a replica of New York? Places where you could buy good luck horseshoes, as in Good luck not getting suckered into this one, another (but significantly less busy) organ grinder with monkey, some photo opportunities with cut-outs, a carriage, a guy dressed up as a conductor wielding a GREAT dog creature puppet (reminds me when I had a baby puppet..), and a Chinatown café. After that, we go to the Bowery, where, yes, a burlesque show can be seen (Its either The Wrong Way or Dumb Doris BOTH starring Nifty Dolores!) I wonder if those mechanical dolls, the ones with the gyrating hips and perky nipples are in it Those are great! Not too sure about the doll in the gold lame outfit with the black hair lol. What do the girls in the show look like? Who knows? They appear on the barkers stage with masks on! Weeee-ha! We then go to something called Life Class, which is another freak show it seems, rubber men, fat ladies, etc. Not too sure what the exotic woman was supposed to represent.. And thats it! Maybe not as great as the first batch, but a MUST SEE all the same! 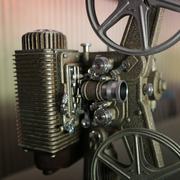